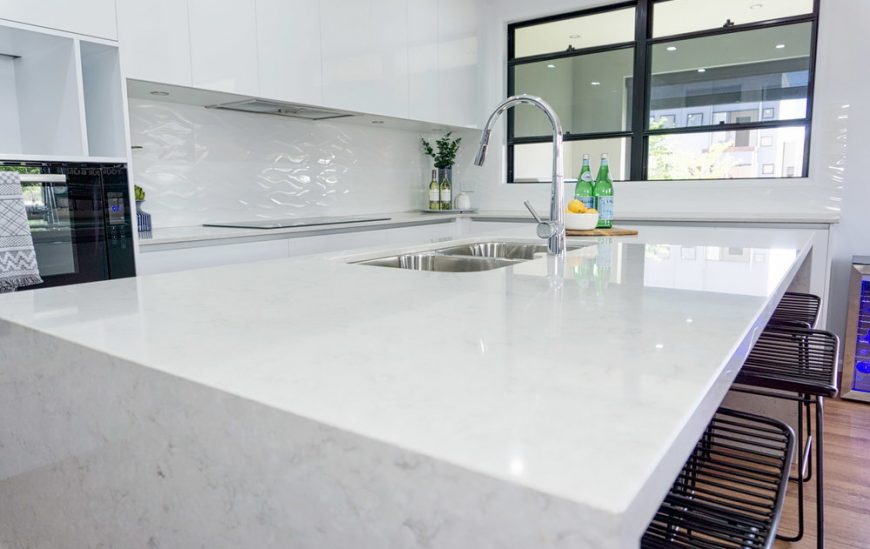 A stone benchtop is at the very top of many homeowners kitchen wish lists, and for good reason. Not only do stone benchtops look much more prestigious than laminate benchtops and other counterparts, but they also offer superior durability and longevity, two vital qualities needed by a kitchen benchtop to last the test of time.

Last week we shared our Ultimate Stone Benchtop Buying Guide, which was very well received. So much so that we received a surge in question relating to stone benchtops. So we thought the best idea would be to gather the most asked questions and answer them collectively in this post.

If you are interested in getting a stone benchtop in Perth, whether to replace an existing benchtop or for your new kitchen or kitchen renovation, you’ll want to read this article.

Given the price of granite and marble, quartz/engineered stone are clearly the most affordable option.

The prices outlined above show quartz/engineered stone, at $400 to $600 per square meter, to be the cheapest stone benchtop on the market in Australia. Therefore, if you find that quartz/engineered stone is above your budget, the only more affordable alternative would be to do without stone and opt for a different material.

Are quartz benchtops better than marble?

Yes! And we’re not just saying that because we sell quartz benchtops and not marble. As prestigious and luxurious as marble appears to be, it is, unfortunately, a poor material choice for a kitchen benchtop. Compared to quartz, one of the world’s hardest minerals, marble is much less dense and more porous.

Because it is less dense, it is more prone to chipping, cracking, and scratching than quartz, and because it is more porous, it has a higher absorption rate, making it vulnerable to stains and marking. As such, for marble to perform well as a benchtop, it has to be constantly sealed, which isn’t a requirement of quartz benchtops. Acidic substances and harsh cleaners can cause damage.

Other disadvantages of marble over quartz include the fact that marble, a natural material, cannot provide the design variations and options that quartz/engineered stone can.

What’s the most durable stone benchtop?

The two characteristics that determine the durability of a stone benchtop is its hardness, which is measured on Mohs scale – the lower the score, the easier they will scratch, and the density is measured with a simple formula: density equals mass divided by volume.

The table below shows the hardness and density of the most common stone benchtops. As you can see, quartz and engineered quartz are the hardest, with a Mohs rating of 7. Marble is the lowest, with a rating of just 3-4.

Can you put hot pots on stone benchtops?

Stone benchtops will withstand heat to a degree but to what degree depends on the type of stone. They are heat resistant, not heatproof.

For example, engineered quartz benchtops are made from over 90% quartz mixed with resin, but the resin can limit the temperates it can withstand. Most engineered quartz benchtops will only withstand temperatures of about 150 degrees. Granite can withstand higher temperates than quartz, but that’s not to say a granite benchtop won’t get damaged by hot pots that have come directly off the stove. They can only withstand temperatures of about 150 and 200 degrees, so placing hot pots and items hotter than 150 degrees will damage your benchtop and is not recommended. It will likely discolour and burn the surface.

It’s worth noting that marble benchtops also have the potential to scorch, so as with quartz and granite, you should avoid setting hot pans on top of them. Always use trivets and hot pads regardless of the stone.

Aside from being the cheapest, quartz benchtops are also the best option. They’re much harder and not porous like marble, and they’re more durable than granite. Stone benchtops will certainly add value to any home, which is why so many Perth homeowners invest in them.

If you’d like to invest in stone benchtops in Perth, then look nowhere else by Ross’s Discount Home Centre. We have a wide range of quartz engineered stone benchtops available at the lowest prices in town. Contact our kitchen salesperson, Fiona, for a free quote today.