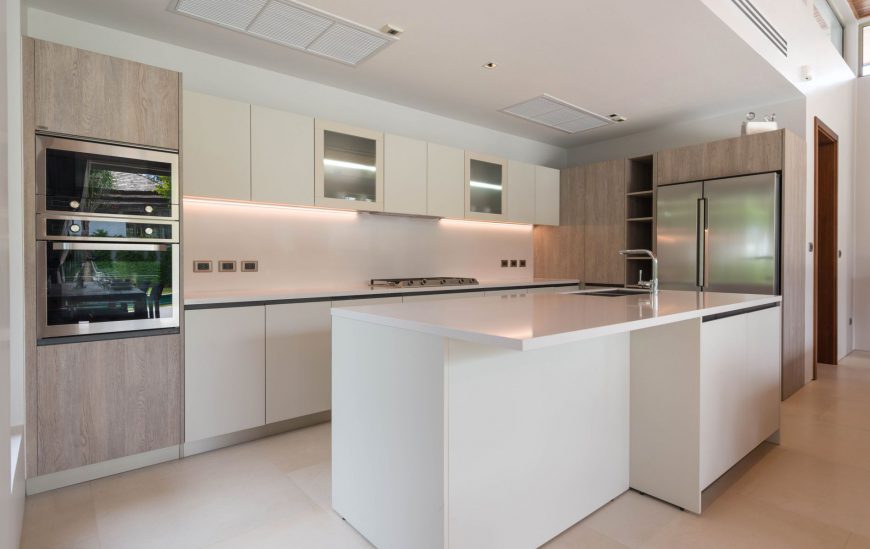 Whether you’re looking to give your kitchen a quick makeover, renovating your kitchen entirely, or building your dream home, the benchtop is one of the most critical design elements of any kitchen. It plays a significate role in the kitchen design, as well as the functionality and longevity of the kitchen.

At Ross’s Discount Home Centre, we know all too well the importance of kitchen benchtops, which is why we offer an extensive range to complement our cabinets. We have a kitchen benchtop for all kitchen styles and designs; all you have to do is choose which one you want for your kitchen design, and we can help you with this as well!

If you’re trying to choose a kitchen benchtop, then there are a few things to consider to guide you into making the best decision for your needs, personal taste and most importantly, budget. I cover these and other elements in this article.

When choosing a kitchen benchtop, first and foremost, consider your needs. After all, a benchtops primary purpose is to serve a function.

Your needs, in terms of functionality, will also impact the overall kitchen layout, which, in turn, determines the benchtop space.

If you consider yourself to be a bit of a Master Chef or home cooking enthusiast, then you will want a lot of beach space and a benchtop that is robust enough to wear vigorous use. In such a case, a stone benchtop would be ideal.

On the other hand, if you’re more of a take out and restaurant aficionado, then your kitchen benchtop needs won’t be as high, and a smaller, and less robust solution will suffice. In such a case, a laminate benchtop would be sufficient.

Both stone and laminate benchtops come in a magnitude of designs. The accuracy in which engineered stone can mimic marble and the likes is truly impressive. While laminate doesn’t look quite as realistic as engineered stone in this respect, in terms of value for money, it also does very well.

Most importantly, you want to pair your benchtop with your cabinetry to create a cohesive look. That may be monochromatic; back on black, contrasting; white on black, or complementary; such as whites and greys, etc.

The deciding factor as to which benchtop you ultimately choose may very well come down to your budget.

If you’re more concerned about creating a masterful kitchen that will be pinned on Pinterest and liked on Instagram thousands of times than you are about the cost, then hands down, a stone benchtop is the way to go. There is no comparison between stone and laminate, or other benchtop materials, as fas as I am concerned. Stone is regal, timeless, and hardwearing. Not only does it look fantastic, but it offers longevity.

Our stone benchtop range features Silestone, a 90% natural quartz compound that is stronger than granite and supported by an impressive 25-year warranty. The range offers a variety of designs, including calacatta marble-look designs, which is very much in-trend at the moment.

On the other hand, if you’re more concerned about being on budget than impressing your friends, family and social media followers, then laminate benchtops are a cost-effective option. You would be surprised by the quality and realistic-look offered by laminate today. Opting for laminate over stone can slash thousands off your kitchen budget, which is why today, laminate is still a strong contender for benchtops.

We all want a designer kitchen that is the envy of our friends and family, and your choice of benchtop is half of the equation. Aside from the design aesthetics, which go without saying, there are other common wishes for kitchen benchtops.

One such wish is a waterfall end. Island benchtops are another. Consider such wishes and if and how they will work in with your kitchen design. Both will impact the overall budget. Another growing trend is to continue the benchtop design on the splashbacks, which is possible with both laminate and engineered stone.

If a kitchen is the heart of the home, the benchtop is what keeps it beating. Your benchtop choice will play a vital role in not on the functionality of your kitchen, but the lifespan also.

When choosing a kitchen benchtop, you should consider your needs, design style, budget, and wishes. In terms of needs, think functionality – is there enough bench space? In terms of design, consider the overall kitchen design and select a benchtop that works cohesively with your cabinetry. Also, consider your wishlist as this will affect the overall price; do you want waterfall ends? An Island bench? A matching splashback?

Most importantly, pay attention to your budget. If you are lucky enough not to be confined by a budget, opt for a stone benchtop. If you are on a shoe-string budget, opt for a laminate benchtop. If you really want stone but have a conservative budget, it may mean forgoing some of your wishes such as waterfall ends or a matching splashback. Where there’s a will, there’s a way!

Whether you opt for stone benchtops or laminate benchtops, you can be sure to find the highest quality at the lowest prices in Perth, here at Ross’s Discount Home Centre. Call us for a quote on your new benchtop today.