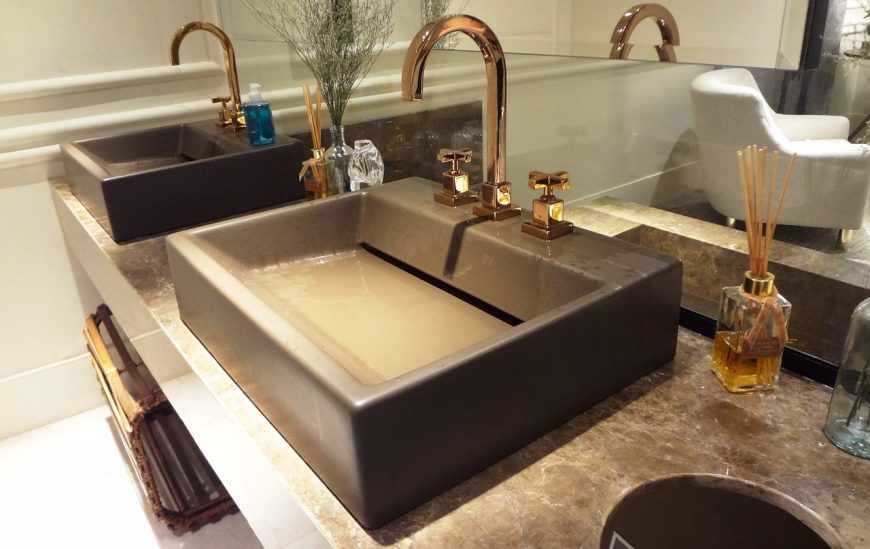 Whether you’re renovating your bathroom or building a new house, no doubt you’ve started looking for bathroom taps in Perth. Obviously, any bathroom is useless without taps. They are one bathroom accessory that you simply can’t do without. But how does one really go about choosing bathroom taps in Perth? With hundreds of options available, ranging from modern mixer taps to traditional taps, I know choosing one can be pretty confusing.

Over my long career as at Ross’s, I’ve met plenty of customers who have been in this very position. From my experience, I’ve come to realise that there are four major stages when it comes to bathroom taps. In this article, I’ll explain what these 4 stages are. If you’re looking for new tapware, then you should look to go through these stages chronologically so that you make the most of your purchase.

1. Consider the size of your bathroom

Before even taking a look at our collection of tapware, customers generally have an idea of what tap sizes to buy. They estimate tap sizes on the basis of the size of their bathrooms. This may seem quite obvious to you, but I must warn you – many people new to home renovations make the mistake of getting swayed away by the numerous options at their disposal. You must not be one of them. You should always consider the size of your bathroom first and then choose appropriately sized taps, so that they do not appear awkward.

2. Consider the functionality of the tap

After our customers have determined what size taps to buy, they then look at functionality. I’ve observed that the choices customers make are quite varied – some choose taller taps that can fit over insets, while others buy wall mounted taps to be installed above counter basins. Other customers with freestanding baths look for taps that have a longer sprout. Our tapware range includes basin taps, shower taps, high rise taps, mixer taps, handheld taps, wall assemblies and much more, so you definitely have a number of choices at your disposal. Remember, when you look for a tap, you must consider what you will use your tap for and also where the water will flow out to.

Water pressure however, will be affected by taps fitted with aerators. According to a study released by Water Corporation, the average Perth Resident uses 2.5 kilolitres of scheme water each day from bathroom tap basins, which is 2% of total use. The report also found that while 91% of basin taps are aerator capable, only 79% have aerators. While aerator limits the water flow through the faucet, keep in mind that it also reduces water use – which will therefore reduce your water rates and also help protect our Nation’s water supply.

4. Choose a style that complements your bathroom design

Finally, only after considering the size, functionality and water pressure aspects of taps do many of our customers, and should you, turn towards looking for beauty and style in bathroom taps. The design should always be your last priority when purchasing bathroom taps. However, when it comes to style, you certainly have many options to choose from. We have an extensive range of bathroom taps in our Perth showroom and online, including the hottest trend for 2016 – matt black tapware. You can choose to match designs such as the square shower mixer with square shower head and square basin mixer, or the cube shower mixer with cube basin mixer and so on. Go on and explore – we feature over 70 different styles for you to choose from!

Here, at Ross’s Discount Home Centre, we feature all types of home improvement products, including an extensive selection of tapware. Our showroom in Guildford, Perth is well stocked, so should you choose to visit us, you can walk out with your choice of bathroom taps on the same day itself. Alternatively, shop from our online store and we will deliver the items you buy to your doorstep in a couple of days, and completely free of cost if you live in Perth Metro areas!

Get in touch with us to find out more about our elegant tapware collection.